Benmarks Motors are delighted to announce a partnership between ourselves and Irish Touring Car driver Árón Taylor-Smith for the 2022 season.

The partnership sees our logo appear on Taylor-Smith’s helmet as we take our first venture into the world of motorsports, and there is no better motorsport in Britain than the BTCC.

The British Touring Car Championship is the premier car racing championship in the UK, pitting cars such as Honda Civics and Ford Focus’ against each other on race tracks around the UK. It attracts huge crowds as well as millions on the TV with races shown live on ITV4.

Taylor-Smith has a good and experienced pedigree in the BTCC, with 211 races under the Irishman’s belt and four race wins to his name. He is racing for the Team HARD outfit in 2022, who are using four Cupra Leons. His team mate will be Nicholas Hamilton, brother of Formula One superstar Lewis.

Speaking on the deal, Benmarks Motors Managing Director Mark Gregory commented: “We’re proud to support Árón for this season and hopefully it’s the start of a successful partnership together. To be associated with such a driver as Árón and seeing how hard he works, we know we’re backing the right man for the new season. We can’t wait to see the Cupra out on track this weekend.”

The first set of races for this season are this weekend at Donington Park, which sees Qualifying on Saturday followed by three races on Sunday. It will be shown live on ITV4 throughout the day with tickets still available for the event.

Other Cars For Sale 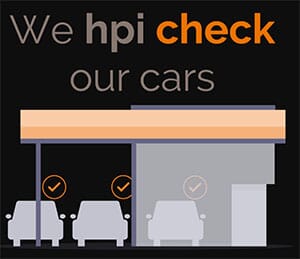 What is an HPI Check?

An HPI Check is a vehicle check provided by HPI Ltd that scrutinises the history of any motorised vehicle registered in the UK including cars, vans and motorbikes. The HPI Check Report will alert you to any worrying information held against the vehicle by finance and insurance companies, the DVLA, the Police and other industry bodies. The HPI Check is probably the most important check you will do before buying a used car and should be your first line of defence against vehicle fraud.

What is the Motor Ombudsman?

The Motor Ombudsman is the automotive dispute resolution body. Fully-impartial, it is the first ombudsman to be focused solely on the automotive sector, and self-regulates the UK’s motor industry through its comprehensive Chartered Trading Standards Institute (CTSI)-approved Codes of Practice.

© Evolution Funding Ltd and associated trading styles are authorised and regulated by the Financial Conduct
Authority for credit brokerage. We are a credit broker not a lender. Our FCA number is 823324. Finance subject
to status. Terms and Conditions apply.

We use cookies on our website to give you the most relevant experience by remembering your preferences and repeat visits. By clicking “Accept”, you consent to the use of ALL the cookies.
Cookie settingsACCEPT
Manage consent

This website uses cookies to improve your experience while you navigate through the website. Out of these, the cookies that are categorized as necessary are stored on your browser as they are essential for the working of basic functionalities of the website. We also use third-party cookies that help us analyze and understand how you use this website. These cookies will be stored in your browser only with your consent. You also have the option to opt-out of these cookies. But opting out of some of these cookies may affect your browsing experience.
Necessary Always Enabled
Necessary cookies are absolutely essential for the website to function properly. These cookies ensure basic functionalities and security features of the website, anonymously.
Functional
Functional cookies help to perform certain functionalities like sharing the content of the website on social media platforms, collect feedbacks, and other third-party features.
Performance
Performance cookies are used to understand and analyze the key performance indexes of the website which helps in delivering a better user experience for the visitors.
Analytics
Analytical cookies are used to understand how visitors interact with the website. These cookies help provide information on metrics the number of visitors, bounce rate, traffic source, etc.
Advertisement
Advertisement cookies are used to provide visitors with relevant ads and marketing campaigns. These cookies track visitors across websites and collect information to provide customized ads.
Others
Other uncategorized cookies are those that are being analyzed and have not been classified into a category as yet.
Cookie Policy
SAVE & ACCEPT